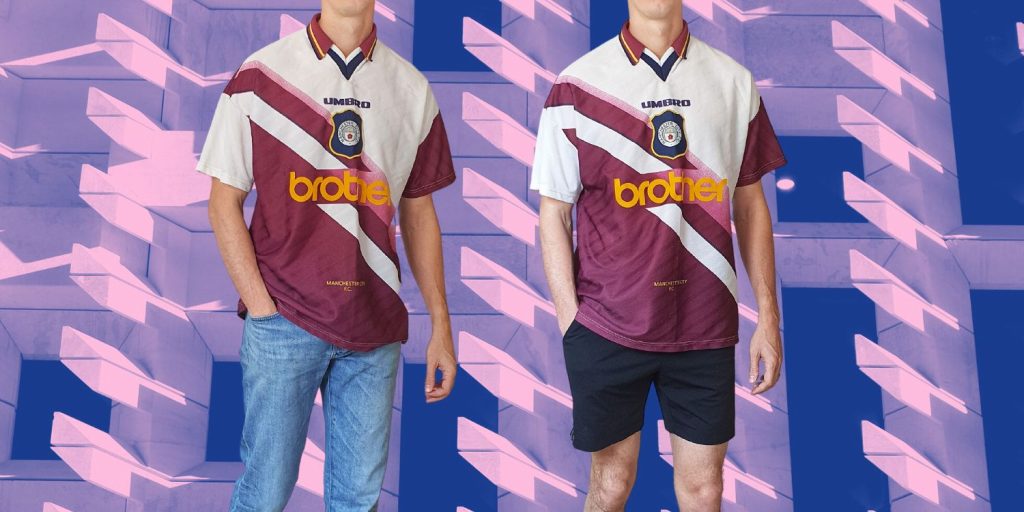 A few years ago my dad was clearing out his wardrobe. At the bottom was a selection of old Manchester City shirts from the 90s and 00s. There was no way I was gonna let them all go, so I convinced him to keep the majority while taking one for myself.

It’s an absolute beauty. It was Manchester City’s away kit from 1996 to 97. It has a classic floppy collar, a giant badge in the middle, and a rare sash across the shirt. It’s a real peach. But, I don’t wear it much: it’s not breathable enough to actually play football in, and wearing a football shirt casually wasn’t something I’d ever considered.

With this in mind, I’m sure you can imagine how pleased I was when I heard about a new trend called blokecore.

Blokecore basically involves dressing like a middle-aged man heading to the football. It takes the current 90s influences we’re seeing in menswear and then wears it like someone who started with this style in the 90s and then just never stopped.

Football shirts are key to blokecore. Any will do, but retro is better. If you can find an authentic one from the 90s, then that’s the best. The aim is to look as close as possible to an extra from Oasis’s Don’t Look Back in Anger music video.

The other elements are equally anti-style. Think stonewash bootcut or straight-leg jeans, Adidas Sambas, or maybe a pair of Reebok Classics. If you need a jacket, make sure it’s Adidas Originals.

Blokecore is mainly an internet trend. But as is the case with many things online, its origin is unclear.

What is certain is that TikToker @brandonlhuntly was an early advocate of the style. His videos of himself wearing various combinations of retro football shirts, light wash denim, and Adidas sneakers have racked up hundreds of thousands of views.

And the trend has definitely kicked on from there. The hashtag “bloke core” currently has 93 million views on TikTok 🤯.

But that’s not to say the style doesn’t have any real-world influences. Palace Skateboards is an obvious one. The brand is terrace-inspired and its latest collection even features Palace-branded retro football shirts. Then there are collections like the Wales Bonner for Adidas lineup that saw the brand breathe new life into Adidas Originals.

Blokecore also has a lot in common with the general direction of current trends. For example, the move away from skinny jeans into styles like flares and bootcut jeans both fit right into the blokecore lookbook.

The same can be said for other currently popular items. The art for JW Anderson’s latest Uniqlo collection is about as far from blokecore as gets, but it’s still easy to see how pieces like the bucket hats, dad caps, contrast collar polo shirts, and cagoules could fit in a bloke core outfit.

The trend also has a lot in common with terrace wear, another recent trend influenced by the things people wore at the football.

How to Create a Blokecore Outfit?

The key piece for any bloke core outfit is the football shirt. Retro shirts are typically quite easy to find. Head to eBay, Grailed, your local second-hand shop, or a specialist like Saturdays Football (U.S.) or Classic Football Shirts (U.K.). Maybe pick up a team scarf while you’re at it.

The right jeans are easy to find too. Any fit but skinny will do. Ideally they will be in a light-wash. If you want to be really adventurous, try a pair of flares or bootcut jeans.

If it’s too hot for jeans, you have two options. Jorts are the obvious one, just make sure the denim is a light shade and loose. If you don’t like denim shorts, then a pair of sporty ones will work equally as well.

The other main part of a blokecore outfit is the footwear. Retro leather or suede sneakers will work well, think toned-back Adidas styles like Sambas or Stan Smiths. Canvas shoes will also do. You’ll probably want to leave your Yeezy 500s at home for this one, though.

Once you’ve got the basics down, there are plenty of extras you can experiment with. Bucket hats and caps will definitely work. Sunglasses will do the trick too. A can of lager is an optional extra, although one I’m fully behind.