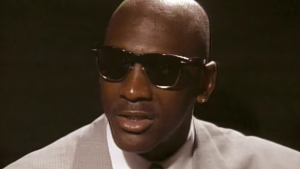 The Last Dance has been widely praised as a fascinating look into the life and career of Michael Jordan. It highlights how as well as being the greatest basketball player of his generation, off the court the star was probably the world’s most marketable athlete.

Jordan’s most famous product tie in was Nike Air Jordan sneakers. He was also a huge fan of eyewear, however, and in The Last Dance, sunglasses play an important part. The shades Jordan wore most often were by Oakley but you can also see him in a great pair of Ray-Bans.

The fact he (and the rest of the team) manages to pull off such a variety of styles should be all the inspiration tall guys need when looking for their next pair of shades.

Jordan joined the board of directors at Oakley in 1995, so it is no surprise that sunglasses from the brand feature throughout The Last Dance.

In fact, Oakley has produced a handy Instagram post that highlights every pair of the brand’s frames worn in the show, as well as the exact point you see them. Check out the embed below for more details.

Unfortunately, the brand no longer makes most of the frames. However, you can buy Eye Jacket Redux sunglasses, which are the evolution of the original Eye Jacket glasses that Jordan wore in episode 8.

In episode six, Jordan gets into some off the court trouble. In a now-famous interview that took place just hours before the first game of the 1993 Finals versus the Phoenix Suns, Jordan spoke about his gambling, dismissing suggestions that it was a problem.

The interview was notable for the fact that Jordan wore a pair of sunglasses throughout. The low quality of the film (it was recorded over 20 years ago) means it is hard to be 100 percent sure what the glasses are, but the shape, details around the hinge, and what appears to be a logo on the temple all point to them being Ray-Ban Wayfarer Max. This supposition is made even stronger as it is a style the star was known to wear.

Unfortunately, Ray-Ban no longer makes these glasses. However, a search on eBay reveals plenty of people claiming to sell vintage versions of the frame.

If you’d rather buy a new pair of sunglasses, the Ray-Ban Clubmaster (pictured above) has a similar combined metal and acetate design, making it a good choice. The main difference is Clubmaster glasses have a metal bridge and slightly thinner temples than the Wayfarer Max.